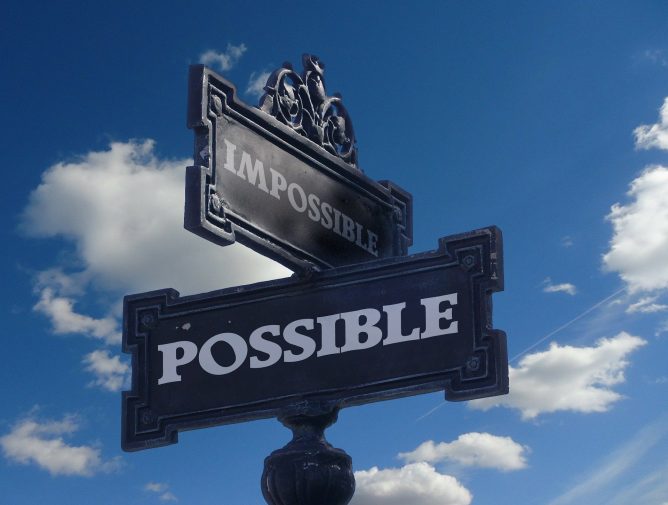 It takes a lot of courage to release the familiar and seemingly secure, to embrace the new. There is more security in the adventurous and exciting, for in movement there is life, and in change there is power.  Alan Cohen

I enjoy challenging my clients to question their thinking. We are so skilled at our thinking that we don’t think about our thinking. We accept our thoughts as gospel and do not challenge the perceptions that drive them. We think we know that when “X” happens, the only consequence or answer is always and only “Y” because we have already had that experience. So we collapse the wave of other possibilities without first examining them to see what other outcomes are possible. Here are some famous examples of collapsing the wave of possibilities:

This `telephone’ has too many shortcomings to be seriously considered as a practical form of communication. The device is inherently of no value to us. – Western Union internal memo, 1878

Well informed people know it is impossible to transmit the voice over wires and that were it possible to do so, the thing would be of no practical value. – Editorial in the Boston Post (1865)

[Television] won’t be able to hold on to any market it captures after the first six months. People will soon get tired of staring at a plywood box every night. – Darryl F. Zanuck, head of 20th Century-Fox, 1946.

A new source of power… called gasoline has been produced by a Boston engineer. Instead of burning the fuel under a boiler, it is exploded inside the cylinder of an engine. The dangers are obvious. Stores of gasoline in the hands of people interested primarily in profit would constitute a fire and explosive hazard of the first rank. Horseless carriages propelled by gasoline might attain speeds of 14 or even 20 miles per hour. The menace to our people of vehicles of this type hurtling through our streets and along our roads and poisoning the atmosphere would call for prompt legislative action even if the military and economic implications were not so overwhelming… the cost of producing gasoline is far beyond the financial capacity of private industry… In addition the development of this new power may displace the use of horses, which would wreck our agriculture. – U. S. Congressional Record, 1875

…no possible combination of known substances, known forms of machinery, and known forms of force, can be united in a practical machine by which man shall fly long distances through the air… – Simon Newcomb (1835-1909), astronomer, head of the U. S. Naval Observatory

Computers in the future may…perhaps only weigh 1.5 tons. – Popular Mechanics, 1949.

There is no reason for any individual to have a computer in their home. – Kenneth Olsen, president and founder of Digital Equipment Corp., 1977

Where would be if no one had challenged the thinking of these men? The next time you find yourself deciding an outcome based on past experiences or perceptions, ask yourself instead:

What are the possibilities?

One thought on “Everybody knows the world is flat”